Researchers from the University of Tokyo successfully developed a small autonomous bio-hybrid drone with a mounted silkmoth antenna for odor source localization. The drone had a simple sensor enclosure that could recognize, in real-time, odorant concentration differences in a pseudo-open environment (outside a wind tunnel) and the directionality of the odor plume (stream). The drone flied to the odor source via a combination of spins and forward movements, by recognizing the odorant concentrations and their directions.

An odorant molecule detector capable of localizing odor sources could have great potential for applications in environmental or security monitoring and search-and-rescue operations. A new study developed a bio-hybrid drone with a programmable flight platform that can sensitively and selectively detect odorant molecules in air and effectively localize their source. A team of researchers from the University of Tokyo successfully demonstrated a bio-hybrid drone based on insect antennae that could recognize odor concentrations and directionality during flight. “This study shows that a simple enclosure is useful for enhancing sensor device directivity, and that a bio-hybrid drone using it can run advanced odor source localization algorithms including spiral movements,” says Daigo Terutsuki, Project Research Associate at RCAST.
Biosensing technologies based on insect olfactoy systems have high odor molecule sensitivity and selectivity. For instance, insect antennae are excellent sensor elements for detecting odorant molecules in air. Electroantennogram (EAG), a simple and effective method for measuring the neural activity of insect antennae, is a portable and highly sensitive biosensing technique. The researchers developed a mountable EAG device using a silkmoth (Bombyx mori) antenna as a portable biosensor and installed that device on a small drone (Fig. 1). 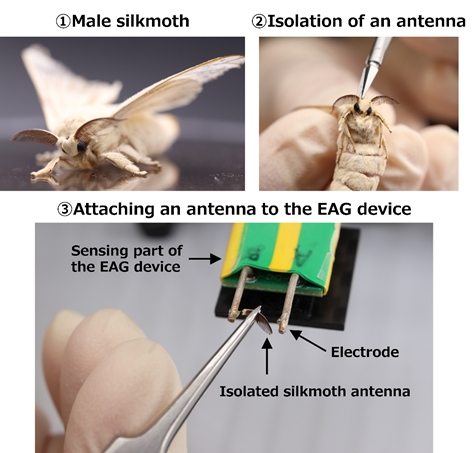 Fig.1 Preparation of the EAG device with an isolated silkmoth antenna to be installed on the drone.

In previous investigations of small insect-antenna-equipped drones, flight performance was limited because either the drone was tethered, or flight tests were conducted in a wind tunnel. Researchers developed a simple sensor enclosure that enhanced the directivity of the EAG device toward odorant molecules. Fig. 2 shows the bio-hybrid drone with its sensor enclosure. Because of this enclosure design, the bio-hybrid drone can recognize, in real-time, differences in odorant concentrations during odor searching outside a wind tunnel. 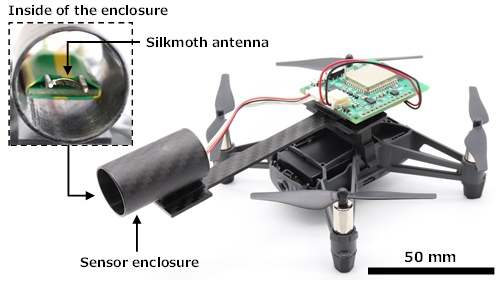 Fig.2 The bio-hybrid drone with a sensor enclosure and enlarged view of the inside of the enclosure.

The drone ran a spiral-surge algorithm that did not require odor source location information while performing searching movements (Fig.3). This algorithm is more reliable than a simple casting (zigzag movements) algorithm in the low-speed laminar flow. 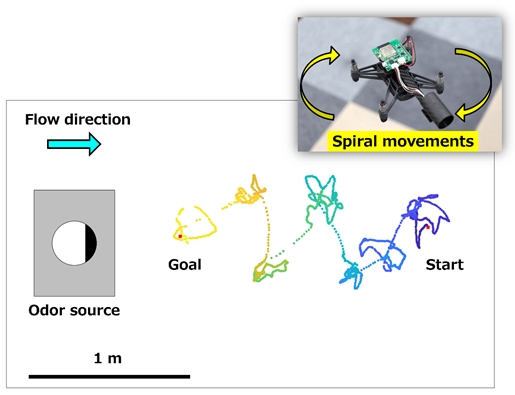 The bio-hybrid drone used in this study is an appropriate test platform for investigating efficient odor source localization algorithms. In the future, it could be used in hazardous substance or pollutant detection and search-and-rescue operations.