Building a One-Way Street for Light 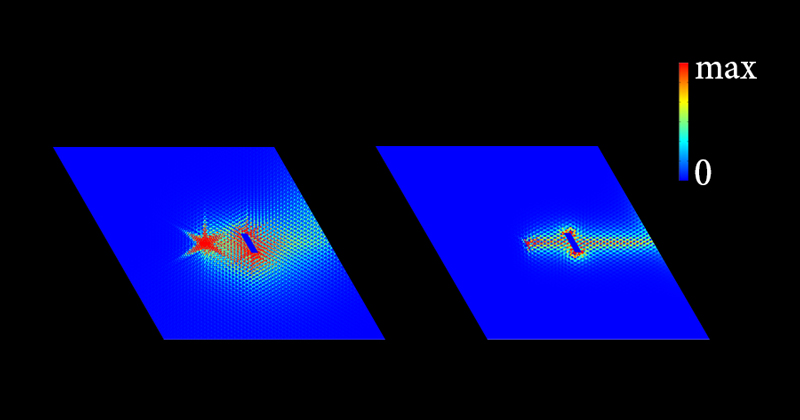 Scientists from the Research Center for Advanced Science and Technology at the University of Tokyo used numerical calculations to predict the optical properties of topological photonic crystals in a magnetic field. They showed that under certain circumstances, the light could be transmitted in one direction along the interface between crystals over a wide range of wavelengths, which would be necessary for new broadband optical communication devices. This work may also lead to advances in our understanding of the fundamental laws of time-reversibility.

Topological insulators are exotic materials that can conduct electricity along the surface, but not inside the bulk. An easy to visualize analogy might be a chocolate bar covered with a metal foil wrapper. A corresponding system exists for light as well, in which special classes of photonic crystals in contact allow light to pass through only at the edge. Although the rules of optics are expected to be reversible, certain symmetry properties in these systems constrain the light to travel only in one direction, which limits its chance to be lost owing to scattering. Although many potential applications exist for all-optical computing or data transmission, there are many open questions surrounding the topic of “topological photonics.”

Now, a team of researchers at the University of Tokyo have used theorical calculations on two adjacent triangular waveguides to study special chiral edge modes that exist at the interface between magnetized photonic crystals. These modes permit light to travel without being affected by backscattering from impurities. The team also found the transmittance to be up to 99.9% and robust even to bending of the crystal. “Our results indicate a possible method for improving the transport performance of one-way modes in magneto-optical photonic crystals,” first author Tianji Liu says. The numerical calculations showed that these modes were created when the dielectric constant of the photonic crystals became very small, which is sometimes called the “epsilon-near-zero” effect. In magneto-optical materials, this effect can lead to several interesting phenomena that are still being studied.

The research can also help probe some fundamental questions of physics, including the breaking of time-reversal symmetry. Normally, the laws of physics would work the same with time running forwards or backwards. However, with these new topological photonic crystals, light with a broad range of wavelengths is confined to travel only in one direction. “This project points the way towards new opportunities for many applications of photonic topological insulators that break time-reversal symmetry, such as nonreciprocal lasers,” senior author Satoshi Iwamoto says.